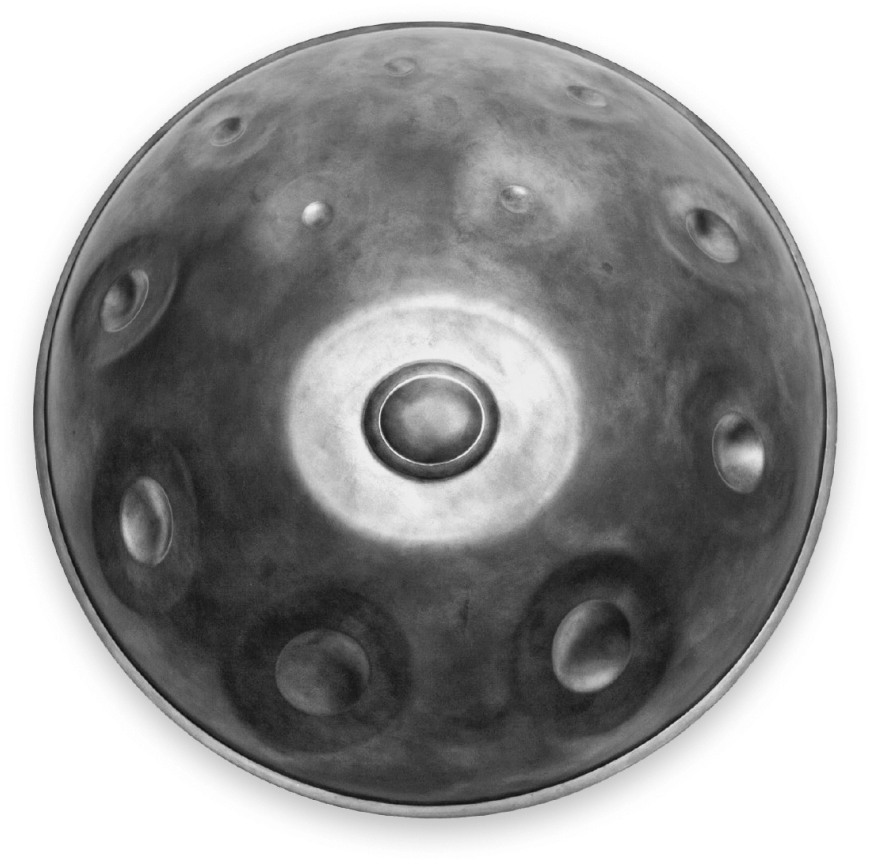 “PanTabs” – is the development of a visual language of musical notes for a modern instrument called “Pantam”.

Pantam is a metalic musical instrument, hand made. It was first invented in the year 2000. Also known as HandPan / Hang Drum. Because of it’s unusual structure and order of musical notes, it became difficult to read and write music in the conventional way, and most Pantam players do not use it.

My project offers a solution to this problem, by developing a new, well-defined visual representation of musical notes, tailor-made for this instrument. In addition, this new language will help new players to learn how to play the Pantam.

In the exhibition I present instruction manuals for playing the Pantam, that utilize the language that I have developed. Since each Pantam is tuned to a different scale and has a different number of notes, each booklet is intended for a different Pantam (total 5 examples). On the cover of each booklet there is a unique shape, a visual code representing the notes and intervals of the Pantam scale. In this manner, each scale receives a “visual name”.

The players can scan this barcode with their phone camera (with Artivive App), and hear the scale in the application. In addition to the booklets, you can watch video tutorials and listen to music samples. 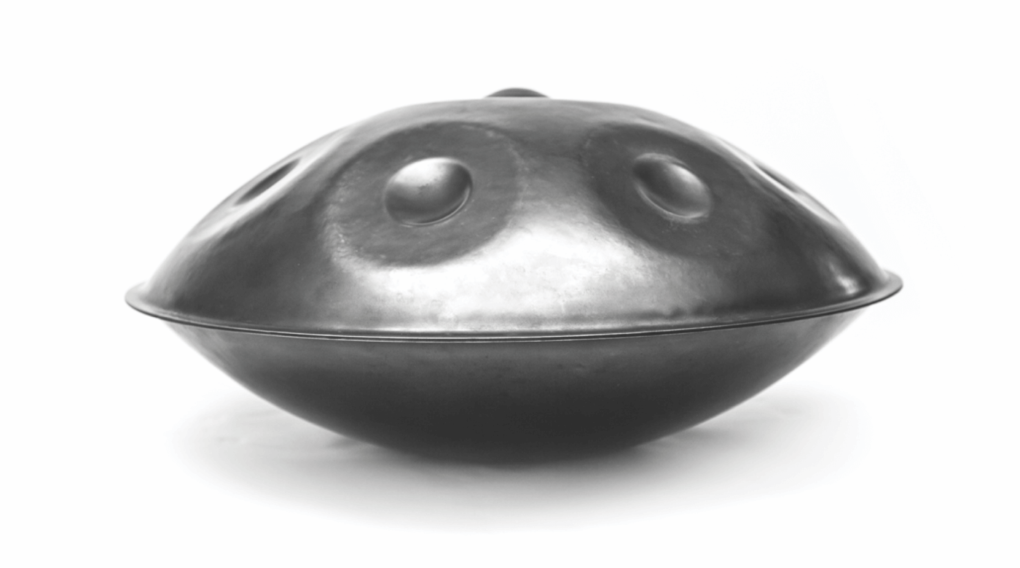 The booklets - "Getting Started"

Each booklet is custom designed for a specific scale so that each player can connect and learn the language of the notes and how to play according to the notes on his or her instrument. However, you can use the booklets and the Pantabs method on each Pantam / Handpan musical scale. 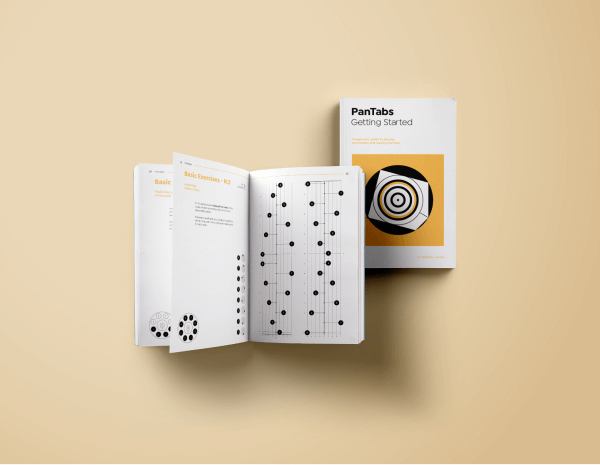 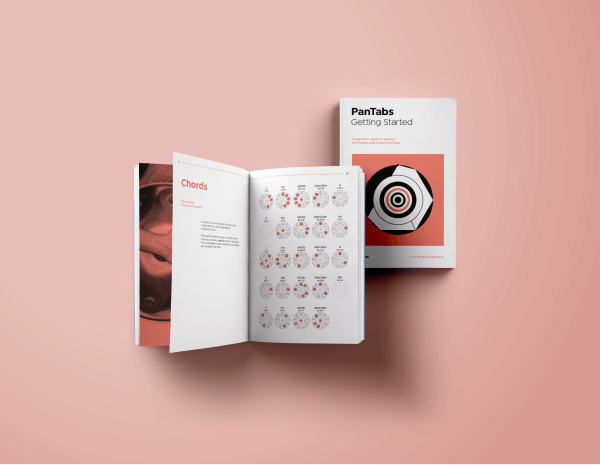 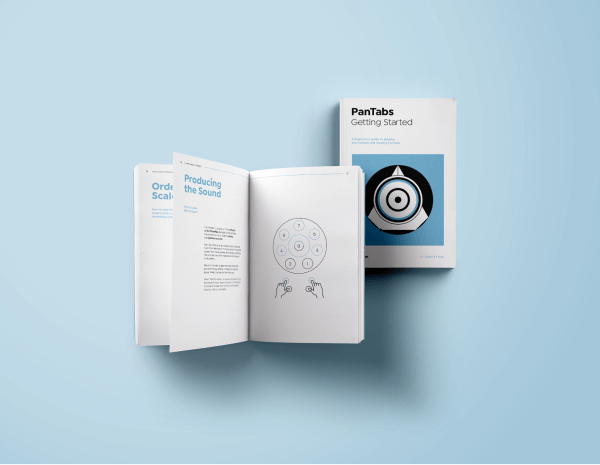 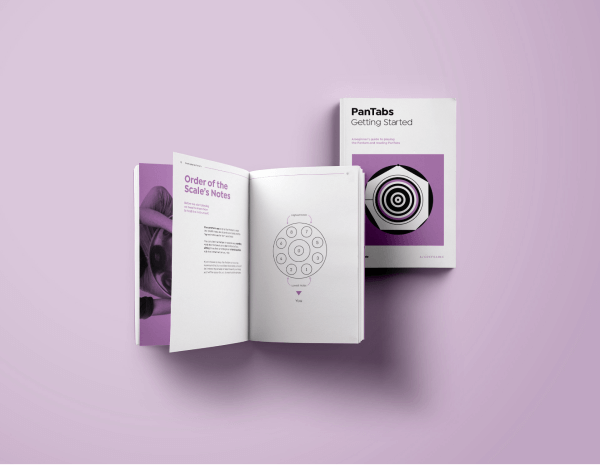 Each booklet is custom designed for a specific scale so that each player can connect and learn the language of the notes and how to play according to the notes on his or her instrument. However, you can use the booklets and the Pantabs method on each Pantam / Handpan musical scale.

Check the new Digital-Pantam app that I've made 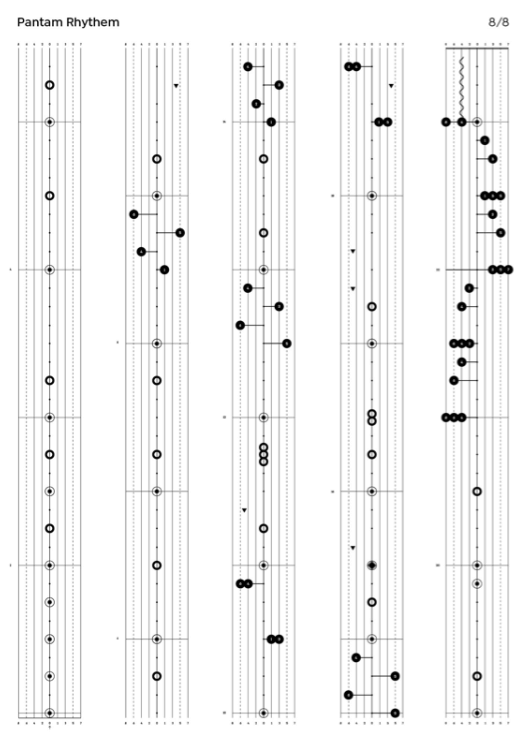 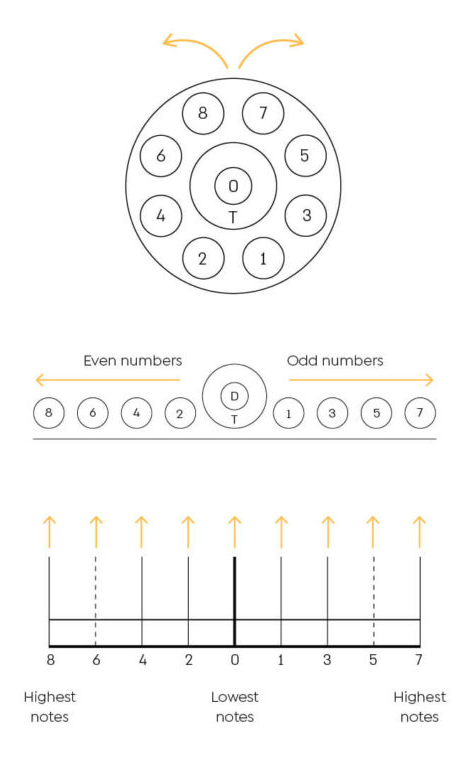 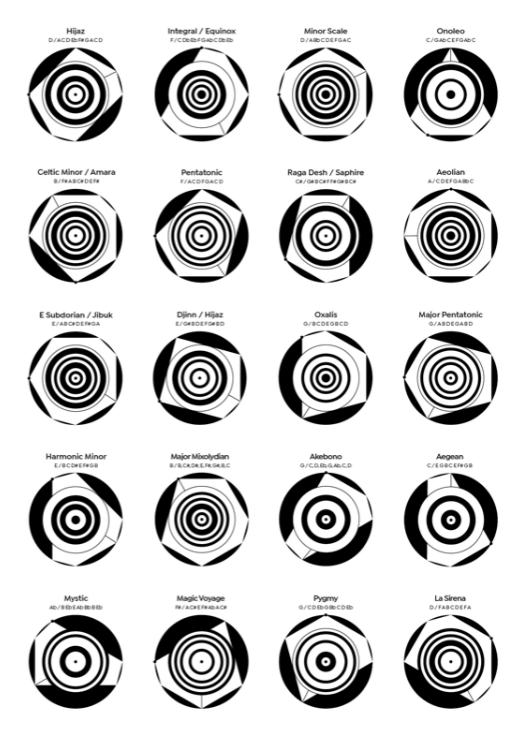 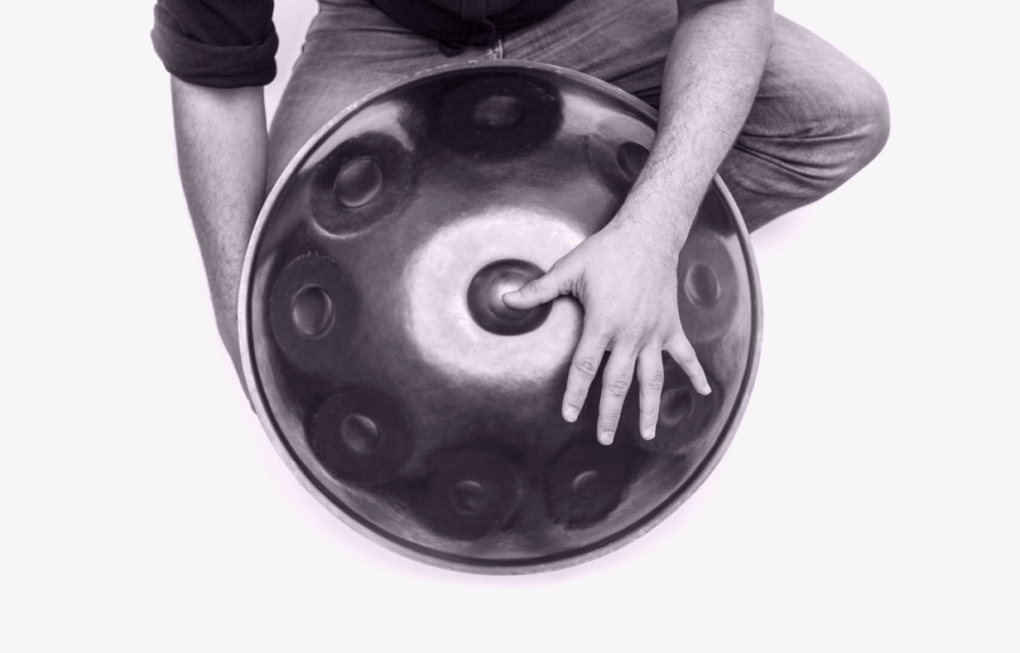 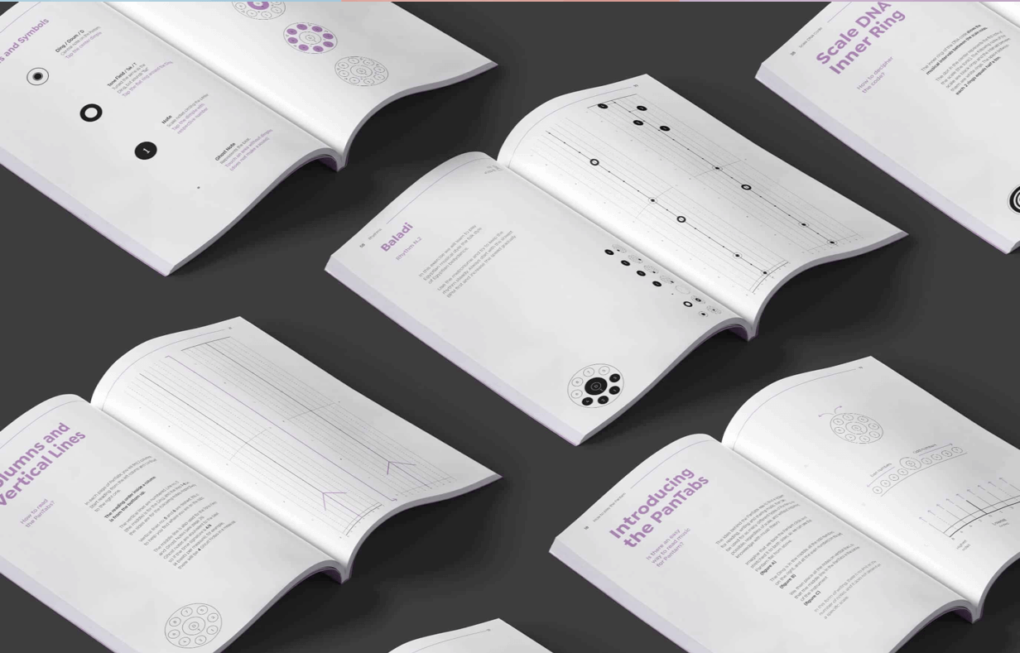 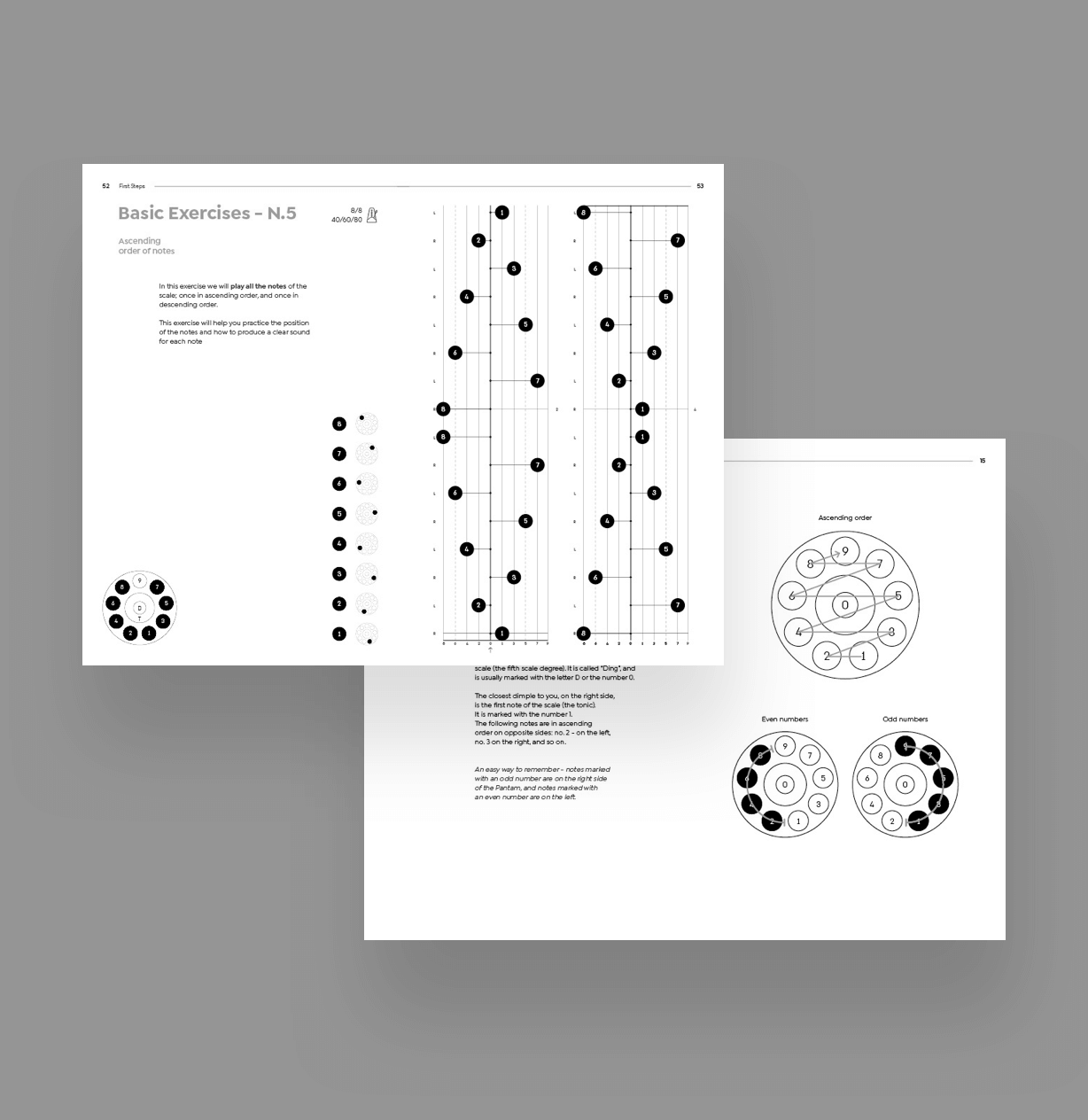 Each Pantam is tuned to a different scale. The DNA code is an infographic signature that represents that scale. Using the code, you can learn the notes of the scale, and the intervals between them. The DNA code are 2 rings inside the PanTab circle.

The inner ring of the DNA code shows the musical intervals between the scale notes. The dot in the center represents the first note of the scale (the tonic).

The following notes of the scale are black rings and the intervals between them are white rings. The space between each 2 rings equals half a ton. Notes in PanTabs are usually marked with numbers.

In this example, you can see the DNA code of the Pantam in Re Minor Scale: D / A Bb C D E F G A C The first note of the scale (the tonic) is A, the dominant is D, which is also the Ding.

Placing the two DNA rings together, inside the diagram of the instrument, creates a unique visual identity for the scale and for the Pantam.

Note: A line extends from the outer DNA ring towards the center inner ring; this line marks the Ding, as it is the center of the instrument. 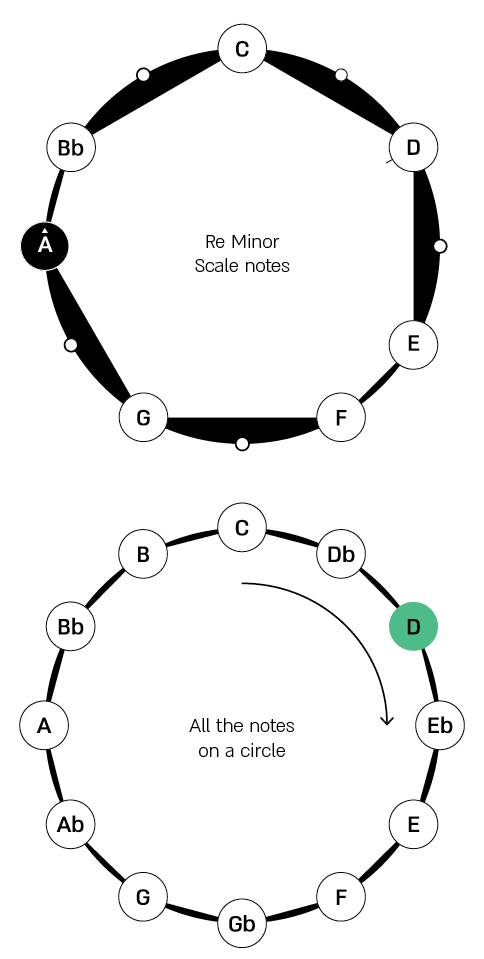 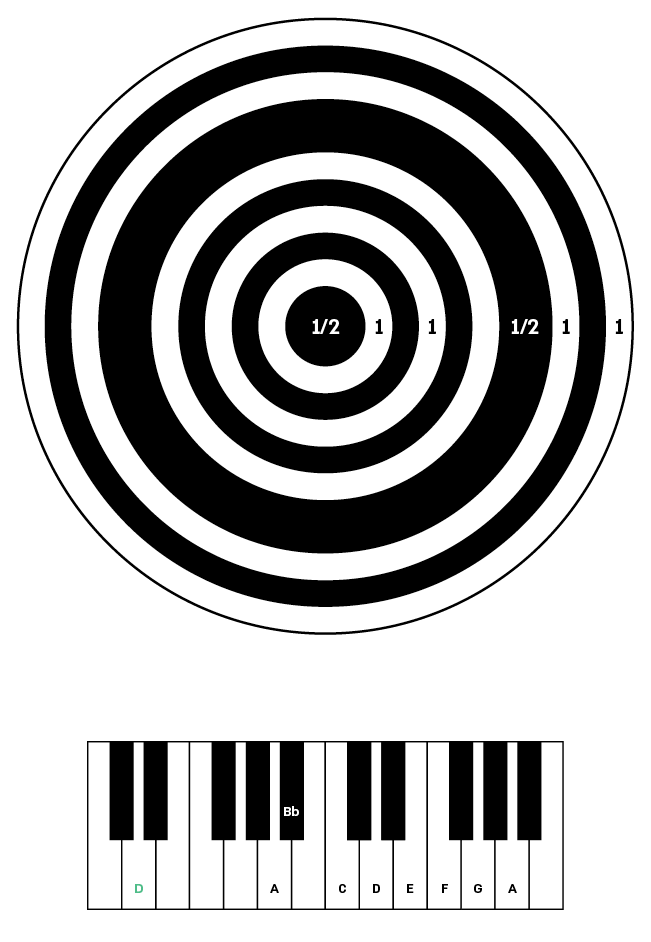 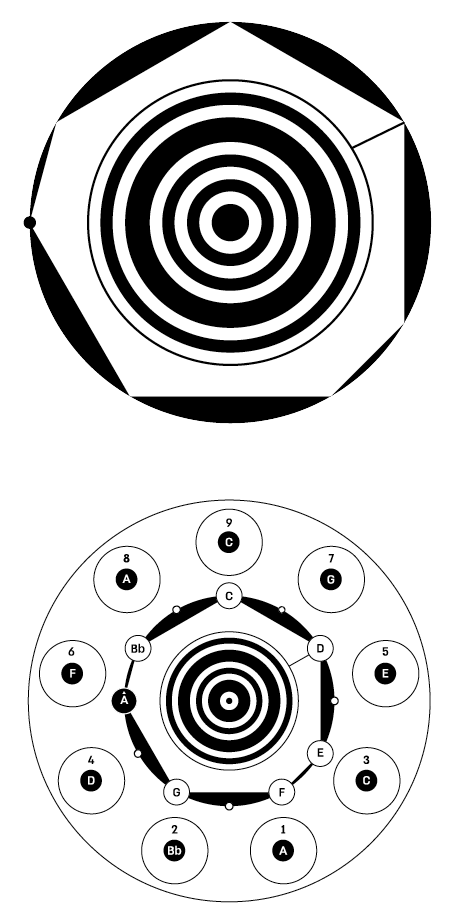 Behind the scenes of the PanTabs project 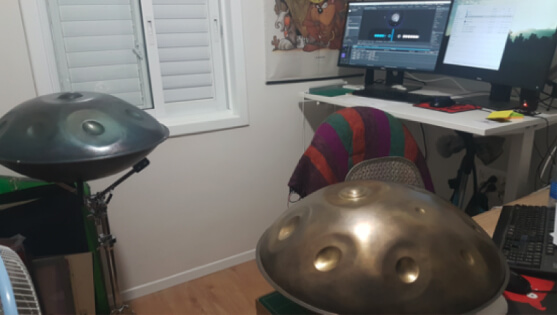 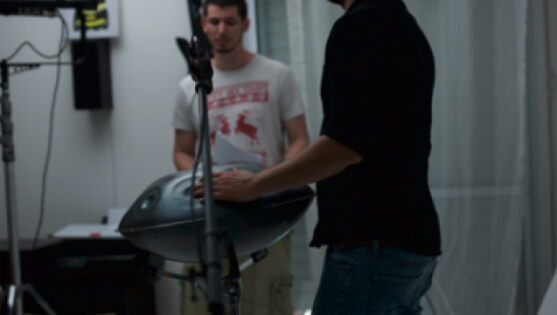 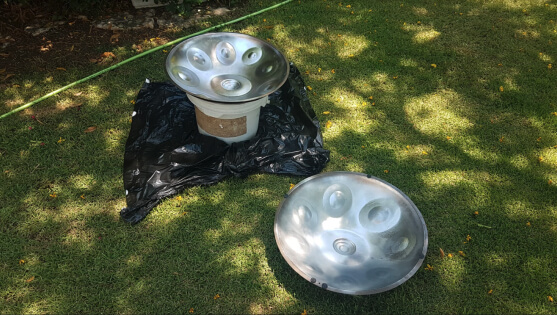 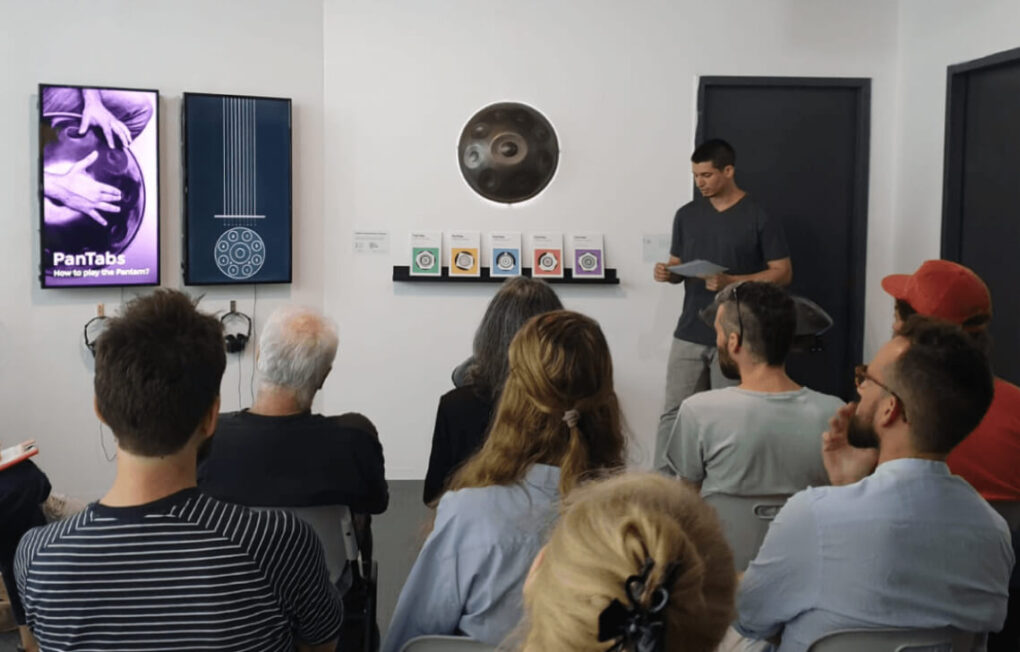 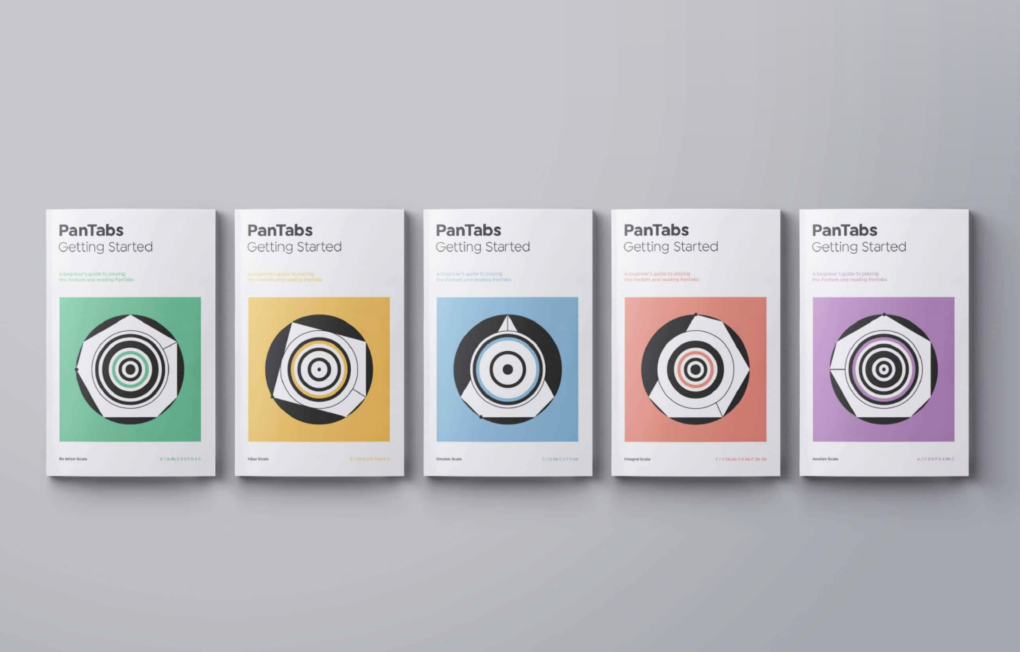 It is important for me to say big thanks to the talented Dan Schechter & And other friends who supported and helped along the way: Yhonatan Ale-Yahav - Yishama Pantam, Kalimba, Sylvain Paslier and many more.

We will update you soon how to purchase your own booklet 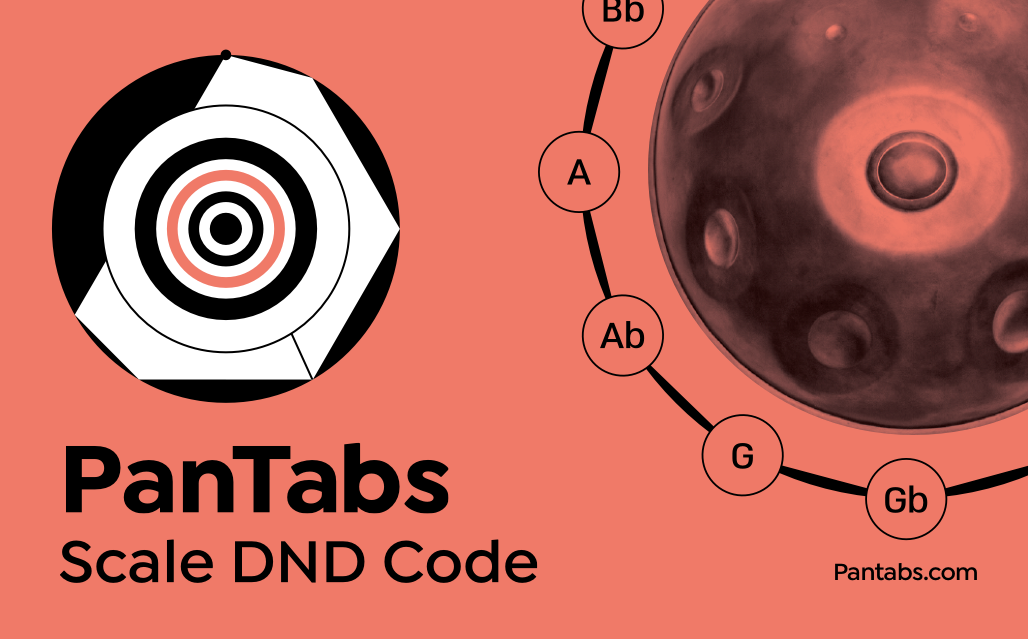 Do you want your own
Pantam Scale DNA CODE? 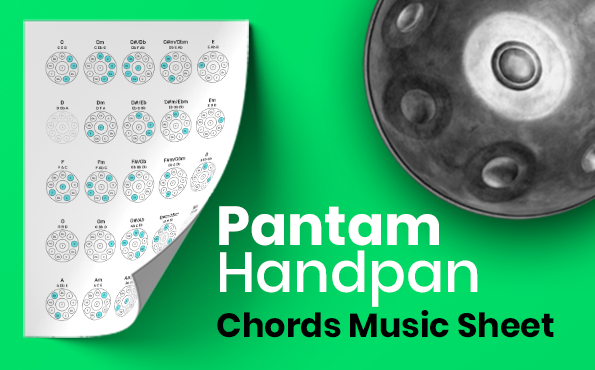 Do you want your own
Pantam Chords Music Sheet? 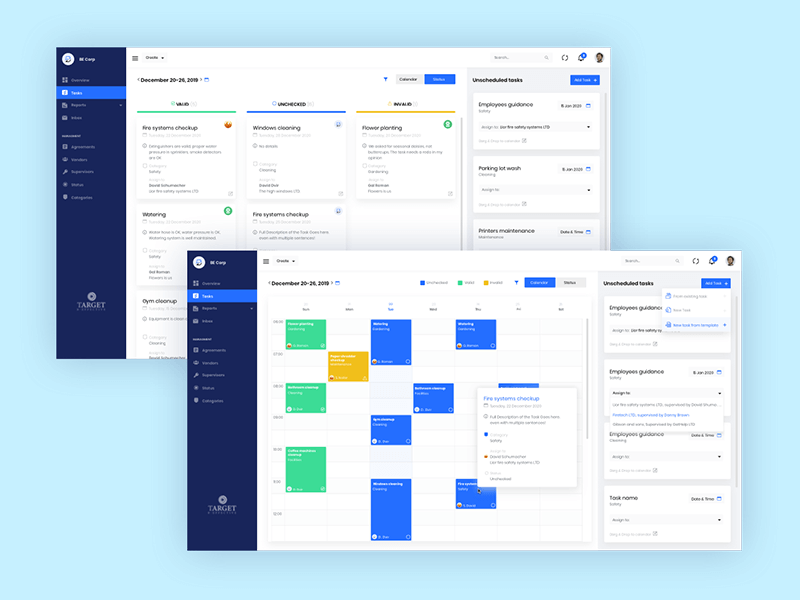 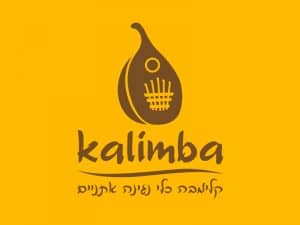 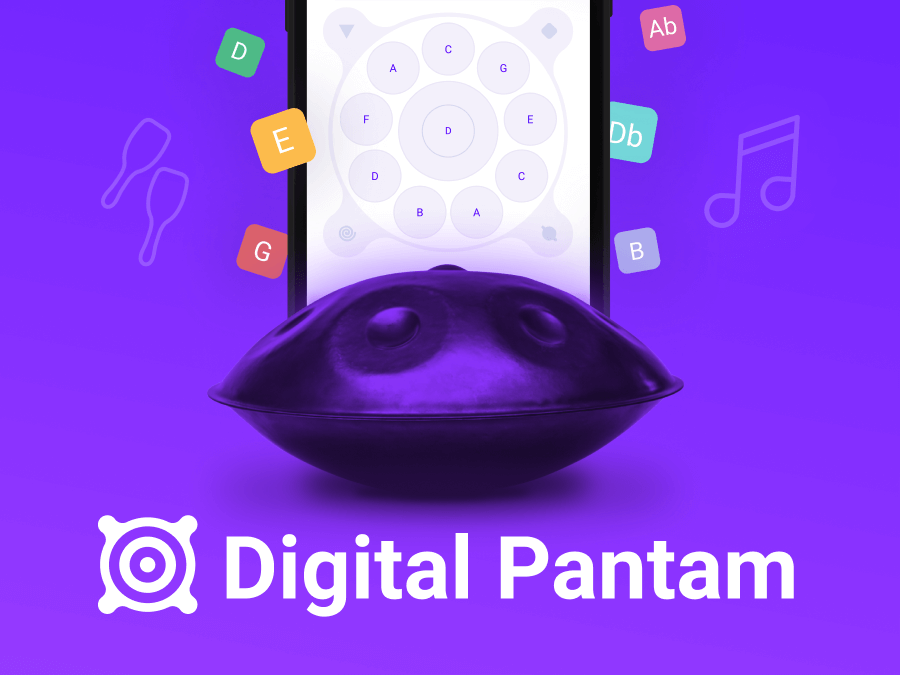 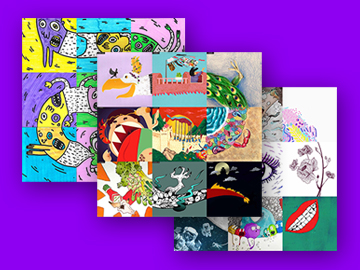 View Project
Back to top